A Thousand Words: I Like This Photo Because My Hair Looks Really Good

(Originally posted on The Nervous Breakdown.)

It was the night of my dear friend Clara’s birthday party. I can’t quite remember if it was a momentous year–round number, the beginning of a new decade–but I do recall having party nerves and that I’d be going solo. I wasn’t seeing anyone at the time or, if I was, it wasn’t serious. Or maybe I was seeing Mark but he was out of town. None of these details matter, really. This essay is about me and how good I looked at Clara’s party.

During this time I’d been introduced to a man my cousin Daphne referred to as “The Genius.” She called him that because of his remarkable ability to transform. “The Genius” AKA Coleman was an African American man in his, mmm, I’d say late forties at the time, who chemically straightened Jewish girls’ hair. He probably also straightened the hair of women of other persuasions but my breadth of knowledge of his doings only went as far as my cousin Daphne, me, whomever might’ve been sitting in his beauty salon swivel seat when I’d arrive for my appointment, and anyone who’d show up as my final touches were being bestowed.

Actually, our relationship was deeper than that. This picture is bringing about a flood of memories and I’m remembering that Coleman and I would have many a heady conversation. He was a teacher for special needs children and did hair on the side. Hair had been his main career for many years but then, it would seem, he needed something that felt more meaningful. I can’t think of many things more meaningful than making a girl with unmanageable hair feel beautiful, but different strokes, am I right? So we’d talk about his teaching and a little bit about his family. We also tended to talk about controversial situations involving race. I can’t recall anything verbatim but I do know we tended to be on the same page. I worked in TV at the time and I’m pretty sure things came up about the lack of roles for African American actors and, if I’m not mistaken, whether or not Eddie Murphy meant to pick up that prostitute or if he was simply being a nice guy.

Alas, Coleman is no longer. In my life, I mean. As afar as I know he’s still alive. He ended up making a permanent move to Sacramento and I made a move to try to accept my natural curl. But during the time that Coleman was around, things, and my hair, went rather smoothly. Suddenly, I had control. Straight hair made me feel like my life was together. I felt pretty.

So the night of Clara’s party while I had, like I mentioned before, party nerves, and was rocking it solo, I knew my hair looked good. I mean look at it. It’s all straight and shiny. But not too straight… there’s still some body to it. 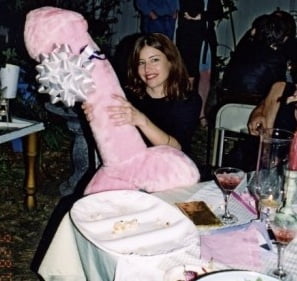 I guess that’s it. I know it’s kind of vain to pick a picture just because you think you look good, but trust me, these days if you get a picture of me, most of the time one or both of my eyes is closed, my hair is suffering from frizz, and what I mean as a knowing or smartass smirk comes off as looking bothered. Here I’m clearly enjoying myself. I’ve spent some time with good company, had a glass of wine or two, and celebrated a great friend. Sometimes it’s the small moments that need to be remembered.