I was shopping at Bloomingdale’s yesterday. Costume jewelry department. I was looking around for a gift. Thought one of my nieces might like the rainbow-stoned necklace in one of the cases I passed by. (It was cooler looking than it sounds. I’ll try to find a picture.) Also, I was with my dog Rufus. My other dog, Theo, was getting some tests done at the vet and I took Rufus out for the day so he wouldn’t be stuck at home thinking about his missing best friend. Rufus is small and manageable, and I like to take my dogs out on errands with me from time to time, killing two birds with one stone (ouch, sorry for the super unsympathetic expression, birds) in regard to their daily walk.

ANYWAY, I’m walking around this island of costume jewelry, spot the rainbow-stoned necklace and as I stop to study it become aware of, at the display just to the left of me, two little girls, I want to say, about five years old. They’re pretty cute, you know, in that way that compact things are cute in and of themselves. But they’re sort of loud, pulling things off the counter, and their mom, if she existed, was not in sight.

My dogs love little girls. Rufus came into my life because one of the aforementioned nieces (the one who I thought might like the necklace) had volunteered at a dog rescue and she and her parents hipped me to his existence. My point is, my dogs are friendly and Rufus is compelled to say hi to all he meets and when they are short like him even better. It’s like he feels a kinship. I assume because he’s closer to their eyes than, say, an adult or a teen with an abnormally early growth spurt. So he sort of pulls to get closer to the girls (again, no mom around to say not to do this, or to say, “Girls, look at the sweet dog…”) and so I let it happen and the girls don’t seem to mind, they sort of looked at him detachedly, until one of them recoils. I pull Rufus closer to me and say something benign like, “Oh, he sure likes to kiss…” and then sort of ignored the girls and let them do their thing… which turned out to be to become rather bratty.

The one with the ponytail says, “I don’t like dogs who bite.”
To which I said, “Oh, my dog didn’t bite you, he licked you.”
“No,” she says, “He bit me.”
And I say (now I’m feeling like I’m in grade school confronted by the mean girl but can finally defend myself because I’ve had a plentitude of decades to think of a good comeback), “Uh, if he bit you I’m pretty sure you would have screamed, and you didn’t, so… he was just trying to give you a kiss.”

Got her. She didn’t have a comeback but scowled at me. I went back to eyeing the jewelry case. Then Rufus pulled to go near them again and I bent down to stop him and give him a back rub and was now at eye level or lower with this five year old duo.

The other one pipes up. “Are you wearing make up?”

Who were these witches? It was like she could read my mind, get inside my brain, knew my foibles, my fears, my weaknesses and strengths, and how to compromise them. I had already been feeling somewhat self-conscious about my face because I’d decided to try out a tinted moisturizer I got a sample of and wasn’t sure if it was the right color for my skin. So this little cute because she’s compact creature had found the exact thing to passive aggressively shine a light on.

I looked at her in the eye, “Yeah…why?”
I truly thought she was going to say something about it being too yellow for me. But instead she said…
“Me too…”

And then I realized she was probably just trying to bond with a woman over her big girl adventures at the make up counter and I felt like an ass and in quick succession wondered if I’d ever truly grow up and out of my self-consciousness and insecurities. But before I had a chance to share that with her (I kid, I wouldn’t have done that… unless we were spending the whole afternoon together or something…) the mom came over, annoyed, bullying the clerk behind the jewelry counter (who started speaking in French to another customer and I just know they were saying disparaging things about her), semi-yelling at her daughters and trying to hustle them over to another counter where she’d been looking at sunglasses or something, never noticing I’d had any interaction with her kids. The clerk ended up taking too long with the customer she was speaking French with and I ultimately decided the rainbow-stoned necklace was probably something I’d like more than my niece. Rufus and I moved on to the ready-to-wear section and eventually to pick up Theo, who didn’t mention or seem to notice my make up, and I’m going to assume I don’t need to tell you the moral of this story.

Except to say, you never know what might be in that pot of gold on the other side of that rainbow. 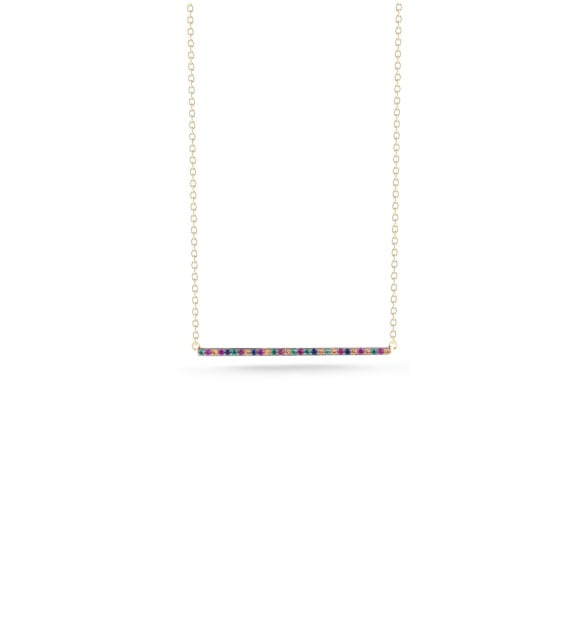