It’s my first collaboration AND my first cartoon!

I am very pleased that my dear old pal, Crispin Wood — who I knew initially as the electrifyingly awesome guitarist in the righteous rawk band from Boston, The Bags, and now for the cartoon work he creates for his comic strip SmallBlueYonder.com — was amenable to partnering with me to bring a thought I had in my head to glorious two dimensional life. And he did it so fast. I’m not sure if it’s because he was inspired or just wanted to get this chick off his ass. Regardless, I’m wholly impressed with how it came out. It’s the strangest thing being anyway involved with something that was first nothing, then a thought, then a thought communicated, then that thought realized in a finished form that you can see. Life is amazing, g-damn it!

I had a moment where I was concerned this might be a little like that SEINFELD episode about the NEW YORKER/ZIGGY cartoon. If you don’t know what I’m talking about it’s fine. If you do, then you get to bask in that extra layer of angst and questioning I’m known and revered for. As for what inspired it, all I can tell you is the muse is a fickle thing, appearing whence you least expect her, forcing her charms and will upon you in the absurdest of situations.

If you have any questions, concerns (about my well-being or otherwise) please leave word in the comment section, email me, text me (if you have my digits), find me on Twitter, find my dogs on Twitter, think about me hard…

All right, that’s it… here’s the cartoon… 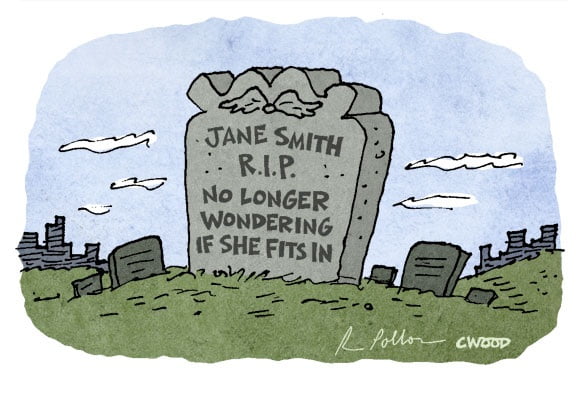 15 thoughts on “No Longer Wondering”