(Originally posted on The Weeklings.)

Baseball. America’s pastime. Where Americans come to pass their time. Three hours worth, usually. And thus when I find myself in the midst of a stadium where the game of baseball is being played, a sport where, let’s face it, the majority of that time quite a lot of concentration needs to be employed in order to figure out if “anything is happening,” my mind tends to search for other amusements. 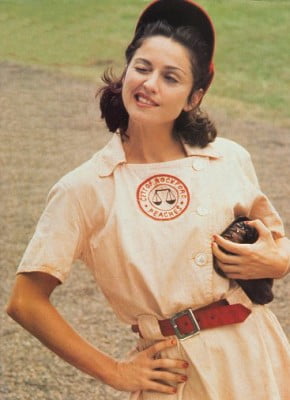 Don’t get me wrong, I love a night spent out in the crisp sixty degree weather (Los Angeles’ idea of freezing) at my home stadium Chavez Ravine. It’s just that after the novelty wears off of deciding which inning to wait until to go get a Dodger Dog, which inning to head off in search of the ice cream swirl served in an upside down mini plastic baseball cap, and the inevitable celebrity sightings where one is in an almost constant state of trying to decide if the familiar looking guy heading into the Dugout Club is someone you knew in high school or “that actor from LOST,” other distractions take root.

At a recent game, I became aware to the point of distraction about the songs being played over the sound system as each batter went up to hit. I wondered about their genesis.* Were the players able to pick whatever song they wanted? Did they pick them for the lyrics or the driving beat? Did they change tunes each season? What if two guys wanted the same song? Would they duel for it? If a player was traded to a different team would he pick a new song to reflect his feelings about his new situation? (You can’t have “California Love” in Pittsburgh.) It’s a good thing a foul ball wasn’t hit in my direction during all of this because I wouldn’t have seen it coming and could’ve been knocked out.

From there I started considering what song I might want as I made my entrance onto the field…my appearance unto the Big Show. I found it difficult to choose. This is mood music, after all, there to score (pun!) a moment. Would I need to be confined to just one song?

Not in my fantasy.

And thus, I’ve come up with three possible scenarios, three states of mind I might find myself in, and a song to heighten, to enhance, hell, to downright juice up each situation.

TO EXUDE CONFIDENCE AND INTIMIDATE:

First things first. I’d need to take control. I’d need to show everyone on that field, everyone in the damn stadium, who’s boss. That would be me. I have the ball. I get to decide when, and if (!), to throw it. I could put it in my damn shorts if I wanted to and sit down to meditate as I gathered my mojo. This is baseball for crying out loud. There aren’t any rules! And so, in order to truly set the stage, show them I verily give a flying frick about anyone’s needs besides my team and our win, I would walk out to…

“Conquest,” by The White Stripes

I know this song is actually about a man believing he’s tamed a woman, only to ultimately find she’s the one in control and has conquered him. But the lyrics work on many levels. Fans and foes, alike, all on their feet in the stands will get the overall message: I am going to strike this dude out.

We start with the stellar Flamenco-infused battle cry horns at the beginning, the crunchy guitars, and then Jack White tells it like it is. I think I would wait in the bullpen as the first verse played, building tension and excitement.

THEN, the ultimate reveal, I, a lady, fully uniformed in baseball togs, except for the unnecessary cup, jog out to the mound. The crowd is on their feet. Most of the rest of the song is drown out by their screaming. I take a few bows in each direction, making sure to give an extra curtsey to the outfield seats, as the last section of my theme song plays.

I take a few warm up throws, using ninety percent of the speed available in my arm’s arsenal to intimidate yet not completely exhaust my reserve. And then, spoiler alert, I end up striking everyone out, causing a substantial number of fans to leave early, because they’re confident the win is in the pocket, and also they want to beat traffic.

WHEN I WANT TO SHOW OFF MY DANCE MOVES

So, there I am in the dugout, for, I presume, at least the first four innings of the game. Hanging with my fellow teammates. Cheering them on. Waiting with a nervous, nay, excited, energy for my turn to take over, while at the same time completely caught up in the moment and each of their mini victories: Haywood’s epic leap over the center field wall…Dooney stealing second…Jackson sliding into home plate, taking us to a four run lead. With a first half of the game this far in our favor, how could I not be buoyant? How could I not want to dance my way to the mound?

Our manager decides it’s time to give the starting pitcher a break so I head out to the bullpen to warm up. I’m not a dick about it or anything, but I’m feeling pretty good. There’s not a lot of pressure. My only competition is with myself and I aim to put my best effort out there. Cause that’s the gig. It’s in my job description: Win.

After bringing the heat to the sweet kid who serves as our bullpen catcher, waiting for the day he’s invited to the main event, I check the score, and with our lead still secure, I make my decision. I tell the stadium DJ — DJ Big Balls — to cue up my intro music and the fun begins.

As per usual, I let the music play for a moment before I head out giving the fans a chance to grasp something profound is about to happen. I enter on the beat, big strides, hips moving to the left and right. I face the back of the stadium and give the people sitting in the outfield seats the “on your feet!” signal with my arms as I continue backing my way towards the mound.

As I face forward I point to the left field seats and engage in some gyrating. I continue moving towards the front of the stadium while doing The Robot…then start jumping up and down, urging everyone to shake it while taking care not to break it.

At this point I’ve made it to the mound and put my ball in my glove and lay it down off to the side. I’m still wearing my warm up jumpsuit and make a show of zipping it up and adjusting my sleeves. I take a quick skip around the mound before getting down in the dirt in full break dance mode. I’m spinning on my back. Doing “the table” before jumping back up into a crossed body arm stance, followed by a standing ovation-inducing head spin. Then I lay down and pose on my side with my arm bent and fist cocked under my chin as I wink at the crowd.

I jump back up on my feet and engage in some heretofore never seen popping moves, then throw it to the second baseman, who gets his groove on Rerun from “What’s Happening” style. Second baseman throws it back to me, and I pass it over to the third baseman who does the splits. Across the diamond the first baseman starts moonwalking. As you might imagine, the crowd is apoplectic at this point.

The third baseman eggs them on further with a “raise the roof” move then jumps back up to standing and points both index fingers at me, wherein I unzip and remove my jumpsuit, revealing a pristine, snow-white, home uniform underneath, as a bat boy runs out to take it from me and hand me my glove and ball.

At this juncture, the music fades out as I place myself squarely on the mound, point my left, gloved, hand in the air, then my right hand, ball in fist, and hold the stance for a few moments as the crowd exhausts themselves with applause, cat calling, and foot stomping.

Then we resume the game.

WHEN I’VE SLEPT WITH THE GUY AT BAT

Okay, we all know this scenario. You’re on the road for what seems like months, even if it’s actually only a couple of days here and there, on and off, peppered between home stints that seem fewer and more far between. It all becomes a blur and home becomes a blip and who are your friends and family if not your teammates? So you become like a larger version of the Partridge Family roving the country (or at least your division of it) in a veritable bubble: travel, workout, play, eat, drink, sleep. Drink, sleep. Drink, make bad decisions, sleep.So this guy at bat. I meet him while in a vulnerable state. Fourth day on
the road, we’re in San Francisco. It’s a pretty romantic city. We have one day off before
our three away games there. My teammates and I go looking for a restaurant my dad
used to talk about all the time that serves legendary sourdough bread. We find it. There’s a three hour wait so we decide to sit at the bar and drink to pass the time. Wouldn’t you know it, some of the guys from The Giants are there celebrating their team manager’s 65th birthday. They invite us to toast along with them and because we are gentlepeople, we join in. It’s a jovial scene, lots of horsing around, patrons of the restaurant looking on because a few of these guys in attendance are big heroes to them. I’m not going to name names but when Big Time First Baseman sets his sights on me I’ll admit I’m a little star struck too. The Giants can be pretty bad ass and he’s no exception. He strikes up a conversation by extolling the virtues of my spitball, though he says he thinks he’s ready for it. He asks if I’m on the schedule for the next day. I tell him yes, and the next thing I know he’s picked me up by the waist and hauling me off to his North Beach penthouse with a view of the water that we stare at after our lovemaking while sitting on an orange foam finger, wrapped only in an a Giants pennant.

It’s awkward the next evening at the stadium. Hearing the roar of the crowd when he steps up to the batter’s circle. I’m warming up at this point, and by the time they pull the starting pitcher, BTFB is at bat. There’s only one song to make an entrance to and it’s:

Come to think of it, this song could work in each category here. Confident, Feel Like Dancing, Slept with Guy at Bat. It is one sexy groove. I commend him in my mind for not dropping his bat right then and there to retrieve me from the mound and haul me off for a home run in one, or both, of our dugouts. But he doesn’t. He’s clearly affected though. I can tell he’s no longer thinking about the ball I’m holding, but rather the ball he wishes he was enjoying with me.

I strike him out. He’s probably relieved. Would rather not have to run in this condition.

I whole-heartedly endorse any major league pitchers wanting to borrow my playlist. Please report back with how it affected your ERA. And a video of your dance moves when applicable.

*This was not due to any players having chosen a song by the band Genesis.

Posted in Posts
Tags: “as published on”